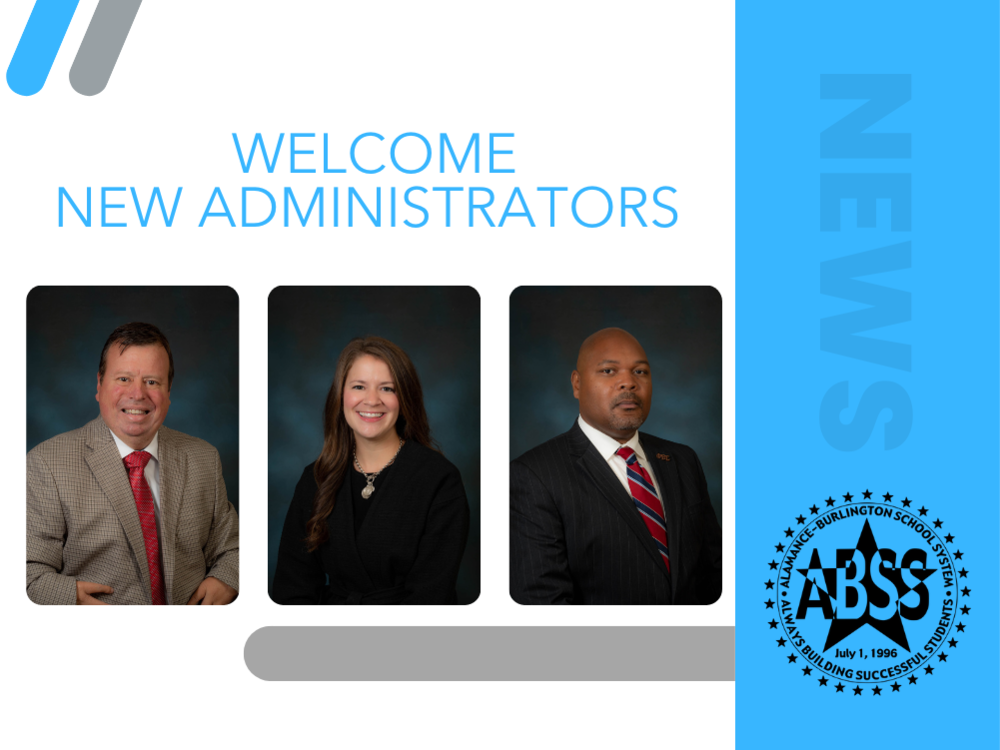 Longtime ABSS Educator and Current Principal at Western Alamance High School, Matt Haley has been named the District’s New Executive Director of School Improvement and Accountability.  Haley started in ABSS in 2001 as a Physical Education Teacher and has served as Lead Mentor, Assistant Principal, and Principal.  Haley earned his Master’s of School Administration from the University of North Carolina at Chapel Hill and is currently enrolled in the Educational Leadership Doctorate Program at the University of North Carolina at Greensboro.

Current Hillcrest Elementary Assistant Principal Mary Beth Chandler has been named the new Principal for Highland Elementary.  Chandler started her career in ABSS in 2012 as a teacher at Eastlawn Elementary and has served in leadership since 2016.  She earned her Master’s of School Administration from the University of North Carolina at Chapel Hill.

Eastern Alamance High School’s Assistant Principal Clifton Thomas will become the new principal at Graham Middle.  Prior to coming to Eastern in 2021, Thomas worked in both Durham and Wake Counties as an administrator.  Thomas earned his Master’s of School Administration from North Carolina State University.

The Board approved a plan to utilize ESSER funds in order to support students in ABSS.  Nine  Community Contractual Partnerships were approved. The Little Village: The Pre-K Component of It Takes a Village at Elon University’s $50,000 request will focus on 3-4 year old children in Alamance County to prepare them for Kindergarten.  The City Gate Dream Center was awarded money for two separate programs.  The DC Next Level program is designed to develop leadership and life skill opportunities for Middle and High School students through weekly leadership sessions and hands on life skills.  The DC Listo program plans to provide bilingual support to Latinx/Hispanic families through a bilingual tutoring program, bilingual kindergarten readiness program, and bilingual parent liaison program. For a full list of the approved programs see PDF

The Board agreed to move forward with a proposal from Jacob A., Lohr M.D., President and Manager of Lohr Land Company, LLC.,  to donate 16 acres adjacent to the new Southeast Alamance High School.  The land is a combination of wetlands and forest with conservation restrictions.  This track of land would not be prime property to build on but would serve a purpose for the school as a natural area for various outdoor classes as well as a natural buffer between the high school and the community.

Williams High School’s Orchestra has been invited to perform at Disney World.  The Board approved the Orchestra’s trip to Orlando, Florida which is scheduled April 5, 2023 - April 9, 2023.