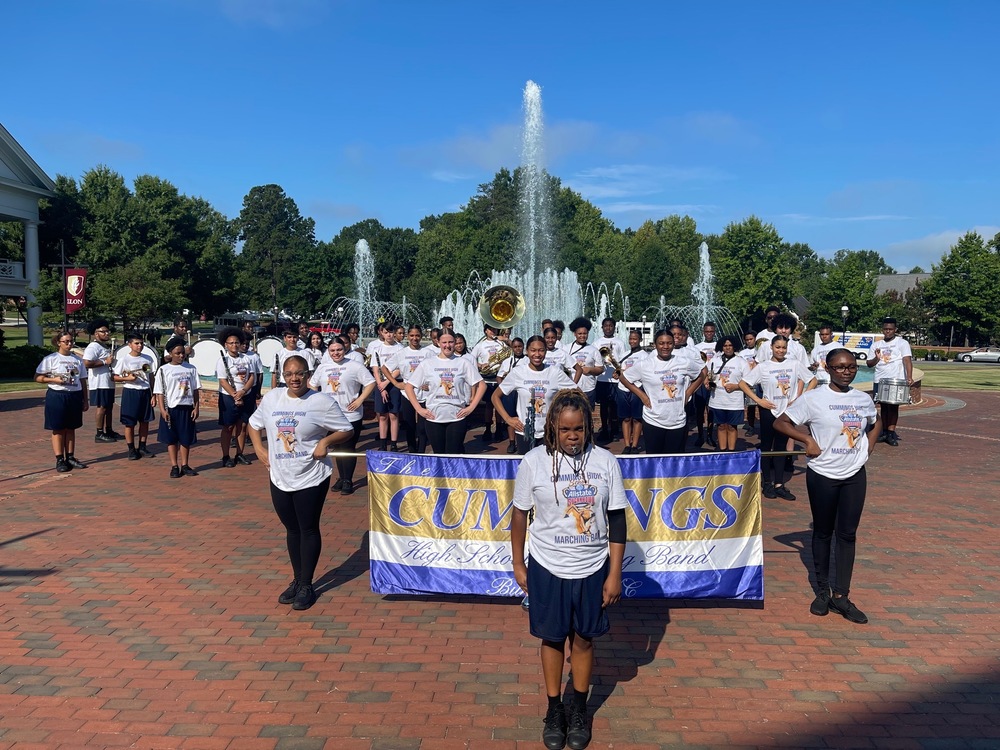 A life-changing experience awaits the Cummings High School Marching Band – if only they can raise $70,000 in the next two months.  Under Director Gregory Milton, the CHS Band has been invited to perform in this year’s Allstate Sugar Bowl in New Orleans on New Year’s Eve. The game is being held in the Super Dome and nationally televised on ESPN. Kickoff is slated for 11 a.m.

“Some of the kids in the band have never traveled outside of Burlington, much less to an
internationally known city like New Orleans,” said Milton, a Greensboro native who
plays every instrument except the oboe and the bassoon. “For these kids to perform
during the Sugar Bowl would be life-changing. I desperately want this experience for
them; however, our fundraising efforts are lagging with just over two months to go.”

Milton said he’s getting calls from alumni, including members of the Class of 1982, which has pledged to match a $1000 donation given by the Class of 1972.  Both classes have issued a challenge to other CHS classes to match or surpass their donation.

Located in East Burlington, Cummings High School opened in 1970 under the leadership
of John A. Freeman, who retired in 1997 after devoting 42 years of his life to education.
Freeman, who wanted all his students to succeed, passed away in 2015.
Cummings High School Principal LaTasha Fonville, who took over the institution’s top administrative post in 2018, said a performance by the school’s band at the Sugar Bowl would be an excellent way to honor Freeman.

“Mr. Freeman pushed his students to study hard, to realize their potential and to never
stop dreaming,” Fonville said. “If he were still alive, he would be ecstatic over this
opportunity and would do everything in his power to help our students get to New
Orleans. It would be great recognition for Cummings High School, the school community
and the district if our band performs at the Sugar Bowl, but it would also be a great way
to pay tribute to the man who did so much for so many students for so long.”
Plans are for the Cavaliers Marching Band to travel 13 hours via bus to New Orleans,
where they’ll be Dec. 28-Jan. 2.

Cummings’ invitation to perform at the Sugar Bowl didn’t just happen. Milton said his musicians were noticed after performing at the ACC Tournament the past two years.

“In five years, we’ve grown from 12 members to 60,” Milton said. “At a lot of schools,
the football, basketball and baseball teams get most of the notoriety, but these kids in the
band work hard, too. I’d love to watch them take the field in the Super Dome, which
would a be fitting way to acknowledge everything they’ve accomplished and something
they can tell their grandchildren about 50 years from now.”

Milton hopes area churches and businesses throughout Alamance County – and statewide
– will get behind Cummings High School and help the band make it to New Orleans.
“I know many businesses are still suffering in the aftermath of the COVID-19 pandemic,
but I believe firmly in the African proverb that it takes a village to raise a child,” he said.
“We’ll gladly accept whatever contributions we receive from businesses in Burlington,
Mebane, Graham and beyond – no matter how big or small the amount. Performing in the
Super Bowl might help these kids remain focused on education, on doing what’s right
and on becoming productive citizens.”